Tony Toponi, a very handsome streetwise young mouse of Italian descent, is a main character of the An American Tail movie series, with the exception of film 2. He meets Fievel at Moe's sweatshop and, after Fievel helps him escape, he agrees to help Fievel find his family. His friendship with Fievel and his family carries into the direct-to-video sequels. He mentions being from Sicily on occasion and it is assumed he is an orphan. Tony's surname comes from the Italian word for mouse, "topo". He's assumed to be in his mid teens since he's taller than the Mousekewitz children and shorter than any of the adult mice.

He is voiced in every appearance by Pat Musick (besides the silent cameos).

In An American Tail, Tony wears a light blue shirt and patched-up brown pants with feet-straps on the bottom, a red scarf and a dark red hat with a yellow strip on it. Like Fievel, he has dark brown fur with tan fur around his eyes and muzzle. He also has black hair (he is one of the only male characters in the series to have a unique hairstyle and not just fur on his head). His appearance changes in An American Tail: Fievel Goes West; his shirt is a darker shade of blue, his patched-up pants are gray, and his hat appears to be different as well. However, he only appears in this movie through brief background cameos. Later, in An American Tail: The Treasure of Manhattan Island, he wears a backpack, the color of his shirt reversed to light blue, the color of his pants are reversed to brown with the feet-straps removed, and his head hair becomes dark brown rather than black. His fur becomes a more grayish-brown color than regular brown, and the fur on his face and neck becomes off-white, and his whiskers are gone. His hat is blue (with the strip and button reversed), and his hair is slightly darker in An American Tail: The Mystery of the Night Monster.

Tony is first seen being yelled at by an angry Moe, who tells him to get back to work.

He is later seen sleeping in a bunk above Fievel. Hearing that Fievel wants to escape, he says "You and me both". Fievel then crafts an escape plan based off of a story he heard. Though the other workers ridicule his idea, Tony believes that Fievel has a decent idea. He introduces himself and, upon Fievel doing the same, gives him an American name: Philly. Tony is the second mouse to leave the sweatshop (Fievel being the first). As he begins to leave, he asks Fievel if he has a clue as to where his family is; however, Fievel has already run off, leaving Tony shouting for him, clearly worried.

Tony is later seen on top of the sign for Hester Street. He has apparently been looking for Fievel all night and, after a little casual talking, decides to help Fievel out. After being hugged by Fievel, the two young mice set out to find Fievel's family.

Later, at the market (where both Tony and Fievel walk straight over Fievel's family without even knowing), Tony states he has a plan all worked out to find Fievel's family; however, Tony soon becomes smitten with a female mouse named Bridget, who is protesting the cat attacks, thus causing the search to go into a grinding halt. Tony slowly, but surely, climbs Bridget's stage (grabbing a flower as a gift) and, upon Bridget losing her crowd, gives her the flower. Bridget is soon smitten with Tony and (thanks due to Fievel), the two would-be lovers end up kissing. Fievel is naturally confused as to Tony's sudden change in behavior, but is blocked out as both Bridget and Tony share a tender moment.

Alas, all good things must come to an end, as the Mott Street Maulers promptly attack the market and destroy everything. Luckily, Tony and Bridget survive the destruction. Quickly realizing that something isn't right, Tony finds that Fievel has gone missing; however, Fievel is safe and unharmed. Explaining Fievel's plight to his love interest, Bridget remembers that Honest John, a local politician, knows every mouse in the city. Bridget then joins Fievel and Tony as they leave to find Honest John (unknowingly missing Fievel's family again).

Later, at a wake for Mickey O'Hare, Tony is mostly silent until Gussie Mausheimer arrives. After pointing out that she is "the richest mouse in New York", Tony asks Fievel "What's she doing slumming in this part of town?" Gussie soon reveals that the ongoing killings of mice (thanks due to the cats) have become unacceptable and proposes an alliance made of all of the mice in New York (who will meet at a rally in a local park) in an effort to get rid of the cats. He is among those who finds out that Honest John can't help find Fievel's family, as John only knows every voting mouse in New York.

Interestingly, Tony is absent from the rally at Mausheimer Park.

Tony is later seen with Fievel, freaking out because the two of them are an hour late to the meeting at Chelsea Pier. When he asks Fievel why he didn't tell him what time it was, Fievel says "But Tony, I can't tell time!" In a rush, Tony leaves Fievel behind, which (in some respects) is a good thing.

Tony is later seen fighting off the cats when they show up early to the mouse base at Chelsea Pier. Fievel soon reveals Warren T. as the leader of the cats and, when Warren's list of demands includes Fievel, Tony promptly demolishes his disguise, revealing Warren T. to be a cat and not a rat! As Gussie states that Warren is through, the cats make one last play of desperation- burning down Chelsea Pier. However, the cats fail and the secret weapon is released. Tony personally takes part in firing a few shots off at the retreating cats.

Soon enough, the cats have been given the boot and the mice are celebrating. However, their joy is short-lived, as Chelsea Pier actually does light on fire, causing the mice to run in fear. Despite the current situation, Tony and Bridget stay behind to search for Fievel, as he didn't show up. Bridget soon discovers Fievel's hat, abandoned, and they search more worriedly than ever. The Mousekewitz family follows them because Tanya believes that they're looking for Fievel. Though Mr. Mousekewitz believes that Fievel died on the way to America, Tony reveals that Fievel has indeed survived and Bridget gives Fievel's family the final shred of evidence that proves Tony right- Fievel's hat.

Joining a group made of himself, Bridget, Gussie, the Mousekewitzes and Tiger (off-screen), the heroes set out to find Fievel.

The next day, Tony is next seen calling out Fievel's name near Orphan Alley while Gussie tries to keep the others' spirits up by saying that they will find Fievel. Eventually, Fievel follows his father's fiddling and the Mousekewitzes are made whole. Tony is last seen saying "I don't hear no one thanking me here!", only for Bridget to kiss him and cause him to fall with her into a puddle.

Tony, assumed to be a few years older, only appears as a background character in An American Tail: Fievel Goes West as a cameo. He is seen alongside Bridget, who is carrying a baby. They move to Green River with the other New York mice after escaping a cat attack by riding a roller skate, settling down in a discarded teapot. It was alleged by fans that Tony's role was arguably limited because of his marriage with Bridget, but the main reason for his limited appearance is possibly because of his voice actress, Pat Musick, voiced different characters at least 12 shows while the movie was in production between 1990 and 1991. He and Bridget are completely absent from Fievel's American Tails, as the character couldn't be recasted due to Musick's personal reasons, which Tony had yet to return until later in Treasure of Manhattan Island in 1998. Since this event is retconned, Tony's future concept remains unclear.

In An American Tail: The Treasure of Manhattan Island, Tony, in his mid teens again, is one of Fievel's best friends, though Bridget is strangely absent. He instead develops a crush on a Native American girl named Cholena. Cholena, however, doesn't return the feelings, and spends most of the movie snubbing his advances. In the film Tony has to deal with new adult responsibilities, and he wishes to be rich. Tony still tries to balance this with having fun with Fievel. Tony has a job at the cheese factory, but gets in trouble for coming in late and is docked a week's pay. The only reason he wasn't fired was because Papa Mousekewitz convinced Grasping that Tony would be obedient from then on. Tony's previous work experience with archaeologist Dr. Dithering gets the plot moving along after Tony takes Fievel to an abandoned subway and they discover an ancient Lenape map. Tony opts to bring the map to Dr. Dithering, and he translates it. revealing that it leads to a treasure. Tony hopes the "treasure" hinted at in the map will solve his financial woes. However, the treasure turns out to be the lost Lenape tribe. Tony spends the rest of the film trying unsuccessfully to flirt with Cholena (while being regarded by the Mousekewitz children, as silenced due to dialogue constraint of Fievel's voice actor at the time) and helping out Fievel and the gang. In the climax he gets beaten up by Scuttlebutt in a fight but is actually rescued by Tanya. Due to concept issues, none of this were repeated or mentioned in the next film.

In The Mystery of the Night Monster, Tony works as a paperboy but wants to be a reporter for the Daily Nibbler. He helps Fievel and Nellie Brie out on a few occasions, but is still for the most part a side character. It is stated that he helped get Tanya her job as Reed Daley's secretary. At one point Madame Mousey gives him a faulty tip on the Night Monster story which leads Nellie and Fievel into a trap at an abandoned house, but luckily Tony comes to the rescue by dropping a chandelier on the mechanical Night Monster. When the mice have been captured by Mousey's gang, and he and Fievel sneak into the sewers to save them, Tony begrudgingly follows Fievel's plan rather than jumping in to rescue everyone trapped in the cages, but when Fievel and Nellie get stuck fighting Madame Mousey at the Daily Nibbler office he gets tired of waiting and floods the sewer to rescue the mice. Tony ends up being promoted to a part-time reporter along with his paperboy job. He also gets his only singing part in the movies during the song "Who Will".

In a early process before production, Tony was designed younger, assuming to be around 4-6 years old. When An American Tail was put in official production in 1985, he was redesigned as a young adult (assuming around 15-17) so he would be a helpful brotherly figure to Fievel Mousekewitz, as well as being romantically interactive to Bridget. 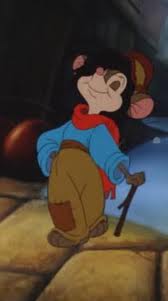 Retrieved from "https://movie-ideas.fandom.com/wiki/Tony_Toponi?oldid=70253"
Community content is available under CC-BY-SA unless otherwise noted.