Chief McBrusque is a major antagonist of An American Tail: The Treasure of Manhattan Island. He is voiced by Sherman Howard.

McBrusque is a ferocious, and overweight chief of the NYPD (New York City Police Department), and a very strict and harsh chief. He enjoys beating and causing trouble to the other mice of New York, particularly the immigrants, seeing them as trouble-makers. He, like the factory owners are suspicious of Papa and see him as a trouble-maker. When he followed Fievel and the others to the underground cave, there was a battle between the Indians and the police. Eventually, the police surrendered and were believed to have left. Then, as Fievel was about to set the gunpowder, McBrusque and Scuttlebutt returned for round two only to drown in the river after Fievel set the gunpowder. He has never been heard of ever since. 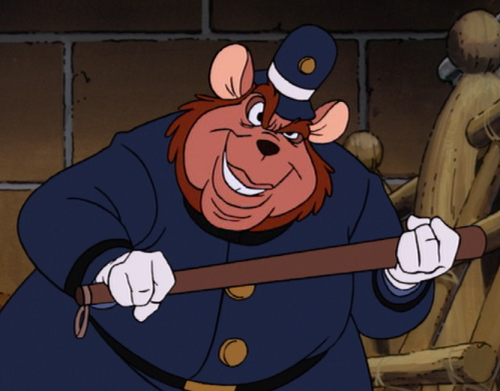 Retrieved from "https://movie-ideas.fandom.com/wiki/Police_Chief_McBrusque?oldid=68906"
Community content is available under CC-BY-SA unless otherwise noted.