Papa Mousekewitz is the main protagonist from An American Tail. Mama's husband, and the three children of Tanya, Yasha and Fievel's father and Sophie's brother-in-law.

Papa is obese and tall, with a gray beard, tan shirt and brown pants, with small glasses on his snout. After giving Fievel his hat he never wears another one. His appearance changes very little in Fievel Goes West, besides being animated in Amblimation's style rather than Don Bluth's.

In the direct-to-video sequels he looks more scruffy and worn down, perhaps because of the terrible working conditions at the cheese factory aging him. He is missing teeth and has an untrimmed mustache. 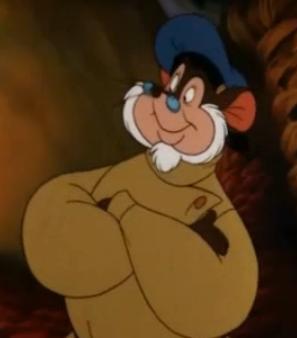 Retrieved from "https://movie-ideas.fandom.com/wiki/Papa_Mousekewitz?oldid=71418"
Community content is available under CC-BY-SA unless otherwise noted.